The Generation Gap: It’s Back! 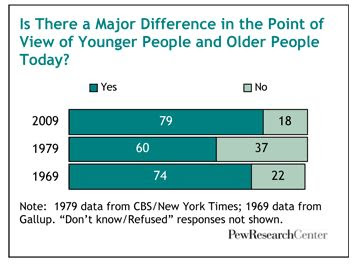 One of the most intriguing things about Millennials is that they do not see themselves the way other generations see them.

Where others see impatience and arrogance, they see confidence and willingness to speak out.

Where others see evidence of materialism, they see “necessities”.

Where others see laziness, they see a desire for balance.

Where others see overreliance on technology, they see an desire for efficiency.

The disparity in generational perceptions was explored last year by Harris Internative. The 2008 Harris Study surveyed a crosssection of age groups and asked each generation to rank each other on a number of qualities. Thirty-one percent of Millennials say that they are the “most socially conscious”. The number of Gen X’ers who put Millennials first in socially consciousness was just 19%, similar to the 15% of Boomers who say so.

Newly released research from Pew shows 79% of Americans say they believe there is “a major difference in the point of view of younger people and older people”. What makes this finding especially interesting is that the number of people who see a major difference between the generations is the same today as it was in 1969, at the height of the so-called ‘generation gap’. What’s more, the figure actually went down in the intervening years (see chart).

The consequences of this misalignment are now being especially felt in the workplace, but they are a caution to marketers, especially those of us over 30. If you are not a Millennial, don’t presume that you think like one.