Millennials: Are They Healthier than Earlier Generations? 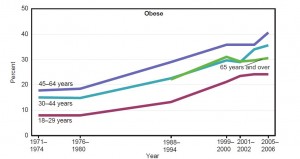 On two occasions in the past year, when remarking on my observations about Millennials and their evolved food preferences, I was challenged by senior executives who quite reasonable asked, ‘If Millennials are so much more sophisticated about their food choices, shouldn’t it follow that they are less obese?” On both occasions I had no ready answer.

Are Millennials healthier than previous generations, or is all the talk about fresh and nutritious foods, gourmet tastes and healthy lifestyles, just that: talk?

The data to address this question is surprisingly hard to find. There is a lot of research on kids and obesity, but adults tend to be lumped together by the CDC and other government health reporting groups. Now, just in time for New Year’s Resolutions, I have the answer, thanks to my new Twitter friend, Rick McGuire, a writer and expert on health and medical issues. He provided a link to a 600+ page report with the intimidating title, “Health, United States, 2008, with a special feature on the Health of Young Adults.” This report draws on a wide variety of sources to paint a most comprehensive picture, based on what I can only call ‘a ton of data’.

Unfortunately, the trends suggest the opposite of what I would have predicted: Gen Y, defined as young adults 18-29, are less active and more obese than earlier generations.

“Nearly two-thirds of young adults did not have regular leisure-time physical activity and three-quarters did not report strength-training at least twice a week.”

Beyond obesity, there are other reasons to be concerned about the Millennial generation’s health. Overall, the report makes for alarming reading. The statistics on risk factors such as cigarette smoking, drug and alcohol use, unmarried pregnancy, and infectious disease rates among 18-29 year olds all suggest a generation who’s health is in serious danger.  These facts are not well understood and important to consider as country is about to take on the enormous challenge of insuring a greater proportion of the population.

Health issues and health care are likely to be the single biggest issue of Gen Y’s lives.  Already, the desire to maintain work-related benefits is contributing to keeping them in place on the job, according to a report by Fidelity (“Gen Y Workers Under Financial Stress Value Their Benefits”).  Although they are healthier than older adults, young adults are still subject to chronic diseases, activity limitations, and death, and need health care for various reasons. As this report points out, however, “they are the age group least likely to have health insurance, and when they do need health care, they experience problems accessing the health care system.”

Looking ahead, the cost of health care overhaul will mostly be borne by Gen Y. The single biggest thing they can do to keep the overall cost of health care down in the future is to change the choices they make now. It’s a new year and a new decade. Let’s hope for their sakes Gen Y makes a resolution to take the health care debate and their own health care seriously.