Who Is The Gen Y “Hipster”? 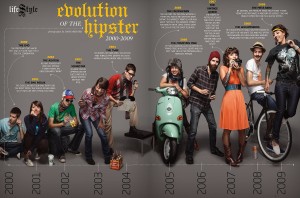 Youth marketing has traditionally been about understanding what the ‘cool kids want’ and then translating those insights and trends to influence the broader youth market.

Yet in an age where everyone who wants a voice can have one, is the idea of ‘influential trendsetters’ as relevant?

I love this graphic to the left (click on it to enlarge) because it laughs at the whole idea that anything is particularly hip, or unhip.  One recent blog hilariously suggested that Eighties Nerds are Contemporary Hipsters.

Today’s hipster can take many forms. Outlaw Consulting, a leading expert on understanding trendsetting youth for companies like Levi’s, Diageo and Nike, features this quote on their web site’s home page:

“Everyone wants to be a hipster, which makes being a hipster tricky and nearly obsolete.”

In a recent interview, Outlaw’s President, Barbara Bylenga had this to say about what Makes Gen Y different from earlier generations.

BYLENGA: “Millennials, or Gen Ys, are definitely different. They seem to feel more empowered – and more entitled– than any generation before them. They have an innate team orientation that makes them excellent collaborators. And the ideas about issues like marriage and career are radically different. Their “American dream” isn’t about the picket fence; it’s a flexible freelance career and a life defined by passion. … Gen Ys see themselves as change-makers. But they’re also busy trying to have a middle-class life, so their protests take different form than youth protests of the past. They see corporation’s as having lots of power but little heart, and they try to create change by using their dollars. The “aha” for corporations is to recognize that values and authenticity are important to this generation — and that directly affects how they spend. American Apparel, for example, has been totally embraced by youth because of its labor practices. Shopping there make them feel like they’re spending money in the right place. Companies that really “walk their talk” about core values will be endeared. If you want to be relevant to Gen Ys, you need to understand their mindset.”

Today’s social currency seems to have more to do with being ‘authentic’ than with being avant garde.

According to Outlaw Consulting’s brand report, some brands, like Converse’s Chuck Taylor shoes, are cool because they’re grounded in the past. Others, like Apple and Nike are cool for the opposite reason: they embody change and constantly reach towards the future. But there is a third category of cool brands, those that appeal to Millennials’ inner nerd. Pop culture has celebrated the nerd/geek culture for many years (Napoleon Dynamite, Jimmy Neutron, Sand Lot). Millennials are not afraid to admit to a dorky side and they admire brands that can do the same. According to Outlaw, Trader Joe’s, Jet Blue and In N Out Burger have won the love of Millennial trendsetters simply by being their quirky selves, doing things they own way and never apologizing: “(Trader Joe’s employees) wear these tacky Hawaiian shirts and publish that ridiculous newsletter. But it’s their own style. And it’s so much more inviting than the normal rigid grocery store.”

In short, the very definition of ‘coolness’ seems to have shifted.

In focus groups, Gen Y tells us that the cool kids today are the ‘DOERS’ — the ones who are fixing, leading, changing, advocating, entrepreneuring in order to make a difference in the world. When you stop to think about it, that ‘s a radical shift….being influential by actually influencing something!