Gen Y: Our Values Define Us 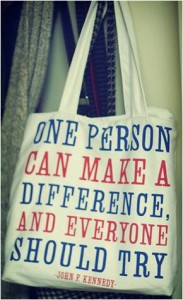 The premise of generational marketing is that each generation assumes a characteristic set of values and behaviors. While it’s not everything you need to know to market effectively, it provides a cultural foundation and helps avoid the ego-centric mistake of thinking other generations are just like you, only younger or older.

While Millennials are socially more liberal than other generations, their values are fairly traditional.

(For more on this see earlier posts, “Millennial Values: Back to the Future?” and “Millennials More Upright than Kids 20 Years Ago“.)

They seek out the genuine and are repulsed by phony.

They are famously optimistic and believe in the possibility of change.

They advocate for the environment and social justice.

They treasure tolerance and diversity, teamwork and balance.

They seek spirituality and are open to the possibility of the divine.

There’s nothing revolutionary here, I could be describing my grandmother’s generation.  It would be very easy to be fooled into thinking nothing’s changed because what has changed is not the content but the dedication to those values.

Millennials can be defined both by their strongly held values and their strong intention to live by them. Generation Y is passionate about making a difference in the world. This is a common thread through dozens of values studies conducted globally.

It’s easy to dismiss their “unwavering commitment as still too young to understand the harsh realities of compromise/capitulation”, as suggested by my Twitter friend, J. Maureen Henderson.  And it’s true that their values are not that evident, at least so far, in their shopping, voting and volunteer behavior.  Most Gen Y buy green products when it suits them and volunteer rates are no higher for Gen Y than Gen X.  They did not turn out to vote in Massachusetts last month.

Certainly, time will tell, as this clever video from a 20-year old Gen Yer implies (be sure watch to the end, the whole thing is a Palindrome). They will either be a generation remarkable for its accomplishments, or one that is notable for its disillusionment.

Personally I think that disillusionment is unlikely. Young adults understand that ‘not everyone grows up to be Gandhi’. Leading a purposeful, life consistent with one’s values is reward enough as Henderson suggests in her Brazen Careerist blog post, “You’re Not Going to Change the World, and That’s Okay.”

“Those of us who grew up as part of the middle-class North American majority learned that we could be anything we wanted, but somewhere along the way, we got it twisted around in our heads that we had to be everything the world wanted/needed in order to be successful. Money wasn’t enough, nor was the love of family and friends, we wanted to matter, to make a difference, to prove ourselves, even if we couldn’t define exactly what this entailed. …..The desire not to hide our individual lights under a bushel is a laudable one, but not everyone is going to be a game changer. And there’s no shame or failure or inadequacy in working an “ordinary” job, in leading a quiet life, in surrounding yourself with a handful of close friends and family. In fact, those are the lives most of us end up with, with the smarter of us realizing that they’re every bit as meaningful as the marquee existences we feel we ought to aspire to.”

For marketers, whether or not Gen Y does or does not change the world doesn’t matter. Values representing the overriding, governing motivations for decision-making, and they matter a lot.