Tattoos: A Defining Mark for Millennials 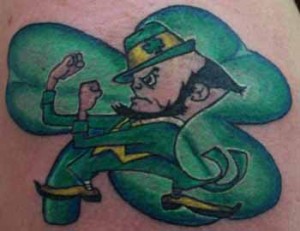 Some of the most widely reported facts from the report on Millennials from Pew Research involved the prevalence of tatoos — and more personal body decoration — among  Gen Y.

“About half (54%) have done one or more of the following: gotten a tattoo, dyed their hair an untraditional color, or had a body piercing in a place other than their ear lobe….Gender is not a factor in either tatooing or untraditional hair-dyeing — men and women are about equally likely to have done either — but body piercing is more common among young women than among their male counterparts.”

The incidence of tattoos among Millennials as well as Gen X’ers is so widespread as to be almost mainstream.

Thirty-six percent of Millennials and 40% of Gen X have at least one tattoo and many have multiples.  (The reason this comes as a surprise to those of us who have never even contemplated the option of body art beyond ear piercing is that many are in discreet places.)

Tattoos are  one of the few evidences of a true generation gap. Just 10% of those over 40 years old admit to a tattoo.

For us on the far side of the tattoo divide, it makes little sense to pay money (sometimes a lot of money, I am told)  and endure pain to create an indelible mark. So it’s worth contemplating what marks Millennials find compelling enough to wear permanently.

A Google search of ‘tattoo designs’ returns over 2.3 million sites, so it’s hard to say what is most popular. The idiosyncracy of a tattoo appears to be part of its appeal. Nothing is quite as personal or individual.

Adam Di Stefano writes in The Next Great Generation blog that tattoos are a ‘Defining Mark’. He agrees that tattoos say a lot about a person, but what they don’t say is that the wearer is a ‘rebel’ or is trying to make any particular statement. According to Di Stefano, there is no single ‘type’ of person who wears a tattoo:

“Tattoos are an art form.  Some people like oil paintings, others like ancient sculptures. I think there’s nothing more beautiful than a well inked tattoo. I love the stories behind tattoos.  Most tattoos have meaning, and generally it represents an important moment in a person’s life. There’s something compelling about the permanence of a tattoo.”

Tanner Maluchnik, who blogs at Life Destiny, observes that sports brand tattoos are a sign of a particular affiliation, that of a fan for a team:

“I associate and branded myself, with ink, of the Penn State Nittany Lion brandmark (not unlike quite a few Notre Dame people I know either subway alum or not inking themselves with the Leprechaun). It is more based on the brand “Penn State Football,” instead of being a student and future alum of Penn State. Over 100,000 wearing white to a football game does not get any more “brand cult.” …Last summer when I was working on the beach with my shirt off everyday, it was so easy to speak with other “associated” people who saw my brandmark and went out of the way to get to know me.”

One of my more embarrassing moments came a few years ago in an interview I was conducting for a youth pastor position for our church.  My daughter had tipped me off that he had a tattoo, and I was feeling uncomfortable with this as a role model.  So I asked about his decision — what symbol would be so compelling as to wear for the rest of your life?  His reply? Jesus Christ.  Needless to say, he got the job.