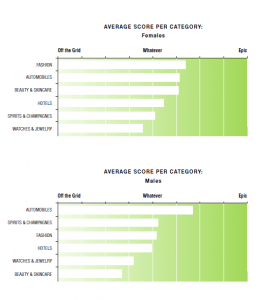 L2ThinkTank released the results of its global survey, “Gen Y Prestige Brands Ranking”. As there are so few brand studies specific to Gen Y, it’s worth taking a closer look at the findings.

First, a word about the methodology. One hundred five iconic brands were rated by a panel of 448 people, with an average age of 28.5 and . The sample included individuals from 45 countries including the U.S. (68%) and was limited to respondents who are on a ‘trajectory to earn more than $100,000 in the short-term and double their income within the next five years.” The questions used to determine rank included awareness and ‘sentiment’ (unspecified).

The survey  revealed that Gen Y men and women both admit to being “brand conscious” (65% of women and 61% of men). However they only consider a few brands to be ‘epic’ — although it’s not clear what this means exactly. Many more fall into the classifications ‘whatever‘, ‘tired‘ or ‘off the grid‘.

The top ten ‘epic’ brands for women are heavily weighted toward high end fashion and hotels:

The list for men is focused on Auto and Hotel brands:

Comparing the two lists makes it clear that the definition of luxury differs by gender. Only Mercedes-Benz, BMW, Audi and the Four Seasons placed in the top ten for both sexes.  However, there was singular agreement about Apple. Apple was the number one brand mentioned spontaneously by both groups as a ‘prestige’ brand. Watches & Jewelry are among the lowest rated categories for both men and women.  Although legendary brands Cartier, Tiffany, and Rolex still rank high, there are many ‘Watch & Jewelry’ brands that 50% or more of the respondents do not know.
These findings seem consistent with the idea that Millennials are defining status and luxury differently, more in terms of experiences than material goods.  Jewelry and watches are clearly in the ‘goods’ category while fancy hotels, fancy cars and fancy clothes can arguably have a more ‘experiential’ side.  There also appears to be some interaction between Millennials and prestige brands online. One in five Gen Y respondents like a prestige brand on Facebook, and one in 10 follow a prestige brand on Twitter. Almost half have signed up to receive email from a prestige brand.

The report gives special kudo’s to Fashion brand, Marc Jacobs, and Audi for their efforts to engage Millennials with its brand through Foursquare and other social media.

Marc Jacobs
Marc Jacobs fostered a unique following at Fashion Week 2010, with behind-the-scenes tweets from President Robert Duffy and live online streams of its shows. In addition, Marc Jacobs partnered with geo-tagging company Foursquare during Fashion Week, challenging enthusiasts to “check-in”and unlock badges at any of the Marc by Marc Jacobs stores in New York. With diffusion lines Marc by Marc Jacobs and Little Marc, the designer has been able to recruit a loyal Gen Y following. To buttress its street cred in the New York community, Marc Jacobs is opening of a bookstore in Greenwich Village. Marc Jacobs has also been among the first top-tier designers to embrace online distribution through popular “Members’ Only” flash sites including Gilt Groupe. The brand recently announced that it is launching DTC e-commerce.

Audi
“Audi makes deft use of online platforms including Facebook to provide sneak peeks of concept cars and solicit user feedback for the LA Design Challenge; the iPhone to create a set of three mobile gaming apps; Sony’s Playstation Home to build a virtual Audi Space; and YouTube to distribute high-profile commercial teasers casting Justin Timberlake. In addition, Audi will be showcasing its award-winning R8 and other models in the summer blockbuster Iron Man 2.”