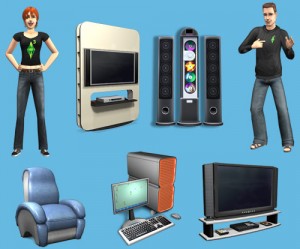 When I am not teaching in South Bend, I live and work in an apartment near Chicago. The building’s residents skew heavily to Millennials. Here’s why:

Living here the past two years has been a great experience. I love the convenience and hardly miss the space (or cleaning requirements) of a 4-bedroom home. According to the blog, Cool Town, I am not the only one to make this discovery. In a post titled “Micro Condos on the Rise in Walkable Urban Areas“, they write:

“People are increasingly favoring giving up square footage in exchange for having the freedom to live in whatever neighborhood they choose, like being closer to work, closer to friends, closer to, well, having a life. You can buy space, but you can’t buy time.”

Trading off car ownership and living space in exchange for a shorter commute and a hipper neighborhood seem to be the choice of many Millennials.

According to CoolTown, “it’s not about the dream home, it’s about the dream hood.” In New York, Brooklyn is a hot spot for Millennials and Lincoln Park in Chicago remains the must-have address for young, urban Chicagoans, despite high prices. A steady rise in average per person living space from 290 square feet in 1950 may have peaked in the 90’s at a whopping 939 square feet. Today, Millennials are sharing space and living with considerably less than 1000 square feet. Less than a third of the Millennials in a recent survey we conducted said they live alone.

A question on the minds of many current homeowners and realtors is whether Millennials will change their approach as they age? Many experts say no, and I tend to agree.

The trend is away from homeownership, especially among those under 35. The rate of home ownership dropped a full two percentage points in 2008-2009, which was nearly twice as fast as the overall rate of decline.

Putting this decline in context,  Richard Florida, University of Toronto professor, researcher and author of “Rise of the Creative Class”, says we are in the midst of a ‘great re-set’, a fundamental transformation of the economic landscape similar to the one our grandparents experienced following the upheavals of the early 20th century. In his e-book, “Renting the Dream, Housing in America Following the Reset“, he hypothesizes that we are moving away from an ‘ownership’ culture where “housing sucked up too much of the world’s and the nation’s capital”, to one where the rate of housing ownership declines and more will opt for ‘renting the dream’. Florida says the economic case for buying a home is no longer as compelling at a time when 30% of home owners are underwater with their mortgage.  If Florida is right, the current proposal change the tax code to be less favorable to home ownership is right on trend and might even encourage it.

Even if, by some miracle, a house isn’t underwater, chances are good that its owners are “house poor” in the traditional sense: too much of their income is being sucked up by house payments and house-related expenses. The rule of thumb—at least this is what our parents told us—used to be that you should spend 25 to 30 percent of your household income on housing. But as average house prices climbed so much faster and so much higher than average wages, that percentage ballooned. In some places, people were spending—and many continue to spend—50 percent or more of their income on housing, never mind shelling out for cars and life’s other necessities.
For these reasons, you might start to think that renters may actually be financially better off than comparable home owners, especially those who bought near the height of the market during the boom. Indeed, that’s what one study has found: among people of similar financial status, those who chose to rent in 2004 had more wealth in 2009 than those who bought their homes.

From  renting to hoteling?

Far from thinking of taking the plunge on home ownership, 29-year old Marty Predd has relocated to different Portland apartments no less than 5 times in the past year in search of better, more affordable space. Now he and his girlfriend Sarah Gates, have decided to embark on an adventure that will take them to Kimpton Hotels in 25 cities, rather than sign another lease. Their rationale? Better amenities extreme flexibility. Don’t like the city you’re in? Just change hotels. They will be blogging about their experiences at http:/kimptoncrawl.com First stop is Seattle.

I thought Marty and Sarah were a little crazy when I first heard about their plan, but according to Florida, hoteling is part of a larger trend:

At the other end of the spectrum, upscale hotel chains such as the Four Seasons, the Ritz-Carlton, and the St. Regis are already in the condo business in a big way, offering complete amenities and soup-to-nuts service for their residents. This kind of approach can be extended to more affordable rental housing.

In fact, it already has been. Korman Communities, for example, is building new kinds of flexible rental communities in New Jersey, Pennsylvania, and suburban Virginia. The AVE complexes offer furnished and unfurnished rental units that come with condostyle amenities and hotel-style service. Furnished units are leased on a monthly basis, but unfurnished units are leased for a minimum of six months and, more ordinarily, a year. AVE communities alsochave movie theaters, pools and other entertainment facilities, organized social events, meeting rooms, and business facilities.”

These shifts are all consistent with Millennials’ desire to collect experiences over material possessions. If you don’t have a lot of stuff,  you don’t need 939 square feet of living space to house it.