The Real ROI of College Education 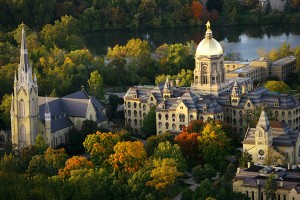 The high price of college is causing some young adults (and their parents) to take a hard look at what is the likely return? While it may still be true that a liberal arts education is a good foundation for life, the link with careers today is perceived to be more tenuous.

Last week PBS New Hour highlighted the plight of many unemployed college grads in Paul Solman piece titled “So you have a liberal arts degree and want a job?” The stories are tragic. Even for those employed, there is a long term effect on earnings of those unfortunate enough to have graduated into a Recession economy. (“The New Pay Gap: Boomers, Gen X and Millennials”, Forbes, 1.5.11)

With five and sometimes six figure investments at stake, parents and students are looking for reassurance that the investment will pay back.

Let’s look at both sides of the equation. 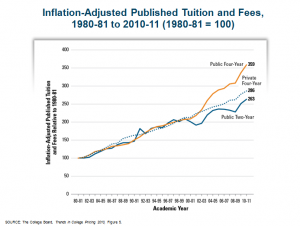 Over the past twenty years, college costs have increased steadily and the increases have accelerated recently. Relative to 1980-81, the cost of tuition at a 4-year private school have nearly tripled, and the cost at a 4-year public institution have more than tripled — in constant dollars.

According to the College Board, 2010-2011 annual tuition/fees at a public 4-year university cost over $10,000 for one-third of the enrolled students. At private four-year institutions, tuition costs over $30,000 for over a third of the students.

Yet many students pay far less. Twenty-eight percent of students at public 4-year institutions pay less than $6,000 a year in tuition and fees. Community colleges can cost even less.

The answer to the ROI question is not simple.As with so many things in life ‘it depends‘ – on where you went to school, what you study, how well you study it, internships, connections, starting salary, when you get married and have children (later is better) and a host of other variables too numerous to recount. 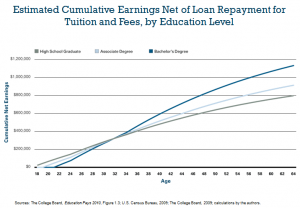 Nevertheless, the College Board provides some helpful ‘averages’ that make a strong case that college consistently beats no college by an average of 54% and generally returns the investment made in lifetime earnings.  ROI becomes stronger the longer a student has been out of school and has a lot to do with where you went to school. (Click here for CNBC list of colleges with the highest paychecks)

Not only is the ROI provable, the gap in median salary is substantial, and growing more significant each year. Since 1975, the median salary of a man with a bachelor’s degree has hovered steadily between $50,000 and $60,000 in 2008 equivalent dollars, while that of a man with only a high school education has declined from $50,000 to slightly over $30,000.

A new book recently reviewed by the Economist, “Not Quite Adults: Why 20-Somethings Are Choosing a Slower Path to Adulthood” by Richard Setterson and Barbara Ray, reports the results of interviews with over 500 18-34 year olds regarding their coming of age decisions about college, and career. Setterson and Ray conclude that the economic case for college has never been stronger. Nevertheless, they observe reluctance, particularly among families without a college tradition, to make the investment. The cite the findings of MacArthur research to support their conclusion that this is a mistake for the students themselves as well as our society as a whole.  In their mind the biggest risk of debt comes from the cost of not investing in college, not college debt.

A university degree has never been more essential for securing good employment. Graduates earn 54% more on average than those who never graduated, yet only a quarter of Americans between 25 and 34 have a bachelor’s degree. Nearly half of the 3m people who enroll in university in America drop out within six years (among wealthy countries, only Italy has a worse rate)….

Good quality, low-cost options for higher education abound (despite the rising price of private tuition), yet the children of poorly educated adults are less likely to make the necessary investment in education. The debt that young people carry today is often not from college, the MacArthur research finds, but from the cost of not investing in college.

Disturbingly, Ray and Setterson, who are academic researchers, speculate that there will be a growing divergence between the college educated ‘haves’ and the non-college educated ‘have-nots’, which they dub ‘swimmers’ and ‘treaders’. This divergence is supported by the salary data mentioned above and the widespread perception that there are fewer options for those with no post-secondary education.

[‘Swimmers’] often have supportive parents, wider social networks, university degrees and a greater sense of civic engagement. Many “swimmers” even choose to move back home to help pay off student loans and save for the future. Most twenty-somethings, however, are “treaders”, who simply replicate the lessons of their poorer, less stable, non-voting and hands-off parents, but to worse effect.