Two automotive marketers were in the news this week, both targeting Millennials.  Of the two, Vespa seems to understand the limitations of stereotyping Millennials, Chevy Spark does not. The difference is that the Chevy team is single-mindedly focused on Millennials to the exclusion of other groups. Vespa is making the right moves, and without the heavy-handedness that screams “THIS IS FOR YOU, ALL YOU MILLENNIALS!” 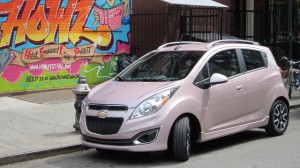 Chevy Spark: “Dear marketers, not everyone is a twenty-something hipster”

Travis Okulski, a Millennial, attended the Chevy Spark demonstration in NYC and shared his impressions on the blog, Jalopnik (8.21.12). The article is tour de force of Millennial observation and general snarkiness. This sample should serve notice to all marketers to “road test” their campaigns with actual Millennials prior to launch :

From the moment I got to the [demo] event, two things were made immediately clear:

1. If you aren’t a millennial between the ages of 16 and 31, you won’t understand this car or anything we did today.

2. If you are a millennial, GM basically assumes you are the most annoying kind of tech-obsessed, PBR-drinking, perfume or cologne-wearing hipster.

It all started off like any auto presentation I’ve seen. The chief engineer talked us through this throbbing 84 horsepower beast of a car. But then the millennial portion began when we started talking apps.

The Spark has a 7″ touch screen with smartphone integration.

Why? To run apps, silly! All millennials love apps!

Just plug in your iPhone or Android phone and nav runs right off it via the hiply named “BringGo” app. It’s a good idea and it costs $50 per year. It’s easy and intuitive to use, and a true pleasure. It can also stream music from Pandora, which means the car doesn’t have a CD player in it at all. All good things.

But when this point in the presentation came up, a millennial anecdote was used to explain why. The Global Program Manager for GM Infotainment, Sara LeBlanc, said she had given a CD to a relative, and was horrified when it was just put into a computer and onto an iPod instead of listened to first.

During the presentation, the older folks in the crowd look like they’d been beamed from the comfortable surrounds of a Denny’s into a place best described by Stefon. New York’s hottest club is Spark, apparently.

One asked if the car had multiple “UBS ports” and others couldn’t believe the nav was solely on a driver’s smart phone. The word “millennial” was uttered nearly 47 times in 15 minutes.

We then went on to drive around New York to sample the Spark, and the route only let me learn that 84 isn’t enough horsepower for a car and it has a good suspension that can handle bumps. I drove one green example and rode in one that is colored “Techno Pink,” a color named for two things that millennials love.

There is more, but you get the idea. Chevy’s crime here is not their attempt to understand Millennial desires and tailor features to meet them, but of marketing heavy-handedness and pandering. As a result, it feels like the worst kind of stereotyping, rather than a genuine attempt to tailor to the segment’s needs.

Okulski drives the point home with this concluding paragraph:

The whole drive was intended to “spark our senses,” but it also gave me a window into how narrow GM is marketing the Spark. It’s a car made specifically for an age group that doesn’t give one shit about cars and would rather ride a bike. It’s a shame, because older folks like a grandmother would love this little economy car. It’s a great “last car” and first car.

But that, unfortunately, isn’t hip.

For a contrast, consider Vespa’s lighter touch. The new lifestyle campaign hits all the Millennial ‘buttons’, but doesn’t shout Millennial.  According to a Mediapost article (8.23.12), the heart of the Vespa marketing campaign is www.LaVespaVita.com, described as a “digital lifestyle and community-focused Web site that combines style, blogs, products, and user content” designed to “make the brand shareable.” The point of the site is to convey that “Vespa is about travel as fun and freedom,” which are core Millennial values and attitudes.

Among other things, the site has a “Vespa Mosaic,” where owners can post photos via Flickr or Instagram by using the hashtag #VespaVita; a Vespa Style Book, which is meant to be a user-generated review of people’s sartorial inclinations — with or without their scooters via the hashtag #VespaStyle; and a “La Vespa Vita Blog” where community members can submit posts about the Vespa lifestyle around trends, personalities, history, culture and adventures. One can also be a contributor by submitting content for the La Vespa Vita blog at www.lavespavita.com/blog. The site also has the 2012 model lineup and a promotion dangling $1,000 in Vespa gear.

The site will not be heavily marketed outside of social media link’s to “Vespa’s U.S. Facebook and Twitter pages, and other complementary social platforms”  as well as “other, like-minded networks whether fashion or entertainment, or music.” Vespa plans a presence at SXSW next year, around music. Again, music, fashion and SXSW strike at the heart of Millennial interests.

One of the things I love most about this effort is its emphasis on nostalgia and the brand’s heritage. Vespa is a legendary brand, and the lifestyle site leverages this heritage for a new generation, right down to the site name which references the classic film, “Roman Holiday,” which famously features Gregory Peck and Audrey Hepburn riding a Vespa.

In another smart move, Vespa keeps this lifestyle site separate from its consumer site, www.VespaUSA.com, which is focused on products and more practical features and programs. It promotes Vespa as a way to reduce oil consumption, pollution and traffic congestion.

Millennials are indeed unique, and as these examples remind us, they require special attention from marketers. Millennials also have high radar for being singled out and stereotyped.  Other examples of campaigns that have done a good job of targeting Millennials without excluding other like-minded individuals who happen to be older are State Farm, Herbal Essence, TGI Fridays’ and more.