We’ve already identified Taco Bell as winners with Millennials. So I wasn’t surprised when they announced the kids’ meals and toys on the menu have been discontinued. Though some kids will be disappointed, let’s be honest: who is Taco Bell’s core audience? Millennials.

According to the MailOnline report, kids meals and toys “weren’t boosting sales anyway-and [Taco Bell] plans instead to focus on appealing to young adults in their 20s and early 30s.” CEO Greg Creed contributed to this article by identifying Millennials as their core target to engage with the “Millennial edgy brand” Taco Bell is. He continued, “having a kid’s meal was inconsistent.”

The well-known Doritos-flavored tacos introduced last year have become a staple of the Taco Bell menu. The two Doritos, Nacho Cheese and Cool Ranch, have boomed with the catchy name, “Doritos Locos Tacos.” Not only do Millennials love the adventure of trying a new fast-food trend, but mixing two favorites of late-night snacking was genius.

From the BCG Millennial Consumer report, “U.S. Millennials are all about instant gratification, they value getting through the line quickly in so-called fast-casual restaurants.” The study continues by proving Millennials are always in a hurry and the relationship with your brand is important.

Here’s where the shareworthy and participation economy plays into why Taco Bell is winning. Not only are they extremely active on Twitter but their Instagram and Snapchat presence has invited Millennials to engage with the brand. Consumers are not only responding to the chain’s social media invitation to communicate with Taco Bell but they’re sharing their excitement and their experience with friends. 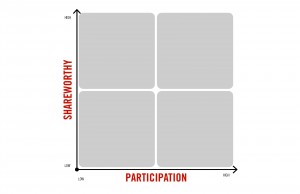 Brands that successfully market to Millennials rank
high in both participation and shareworthiness among
the generation. Copyright © 2013 by Barkley. All rights
reserved

BuzzFeed Sales Director, Marian Thomas wrote about “A Day In The Life Of the Social Media Team At Taco Bell” earlier this month. It takes you through their experiences at the Taco Bell Headquarters doing everything from touring and taste testing to tweeting. Not only did they customize their day full of social media to their current guests, they invited them into the “innovation kitchen” to test their food as well as create their own creations.

Point is, Millennials want to be involved. Without the distraction of the kid’s menu and toys, Taco Bell believes it’ll drive traffic through Taco Bell that much more. The more obvious the restaurant makes it targeting toward Millennials, the more they’ll notice, share, and participate.