Marketing to Millennials™ During March Madness

It’s that magical time of year when all the drama of the NBA seems to disappear and everyone turns their attention to the NCAA Tournament and all of the madness that comes along with it. What is it about the tournament that captures the undivided attention of millions of viewers? Simple – the tournament itself is centered on communal values and encourages healthy competition. Not to mention its great basketball! 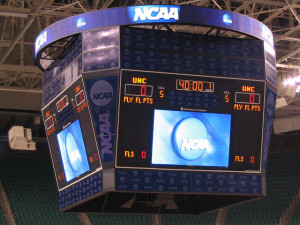 Millennial viewers are among the highest demographic that are tuning in for this year’s tournament. The primary reason being that Millennials are either still in college or have recently graduated and still feel strong connections to their universities. The other reason is that the bracket challenges encourage friends, family, peers and co-workers to compete with each other in a communal setting.

According to a survey released by CareerBuilder, 22 percent of Millennials say they have participated in a bracket challenge in the past and 16 percent planned on doing so this year. These numbers prove that March Madness is a marketing goldmine for brands looking to connect with the Millennial demographic.

This year, there are sixteen official tournament sponsors who are aggressively promoting and advertising new brand lines and products as well as increasing consumer awareness. In an attempt to surpass last year’s $1.5 billion tournament ad revenue, brands are applying creative techniques to reach Millennial viewers. Burger King, Papa John’s and Pizza Hut have all included sports personalities in their spots playing on the high Millennial demand for sports content – especially during the tournament. 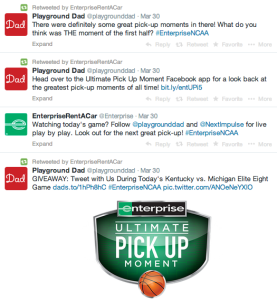 Enterprise is another corporate sponsor that is promoting collegiate affiliations in its advertisements aired during tournament games. The company is one of the nations leading employers of recent college grads. The advertisement connects employee collegiate pride with a successful career at Enterprise. Enterprise is also running a series of print ads that echo similar sentiments portrayed in the “We played” TV spot.

Many brands are also playing up the strong social media presence the tournament has for Millennials. Unlike many other televised programs, March Madness is essentially Tivo proof because live updates will be constantly posted in the Twittersphere as well as on other outlets. In 2012, 88 percent of tournament viewers used their mobile devices for March Madness related activity. It can be assumed that this number has only increased in recent years.

March Madness, like the Super Bowl, has become one of the most anticipated sporting events of the year. As Millennials cheer on their favorite teams and alma maters, brands are taking this opportunity to create engagement opportunities that draw in the powerful demographic.