Why Emojis Aren’t the Right Marketing Move for Every Brand

Emojis are everywhere. Between texts, social media and now advertisements, you can’t get through a day – no, even an hour – without a plethora of heart eyes or upside down smiles (although my personal favorite is 🙄).

In fact, according to the 2015 Emoji Report by Emogi Research, 92 percent of the world’s online population uses them. It’s not just consumers who adore emojis for embellishing their communication, either — major brands like Apple and Taco Bell have begun to incorporate emojis into their marketing strategies. In fact, from 2015 to 2016, brand emoji usage increased by almost 800 percent. While seemingly a good idea to connect with modern audiences, brands need to be aware that their efforts aren’t always successful.

When used incorrectly by brands, emojis can come off as gimmicky, which is a major turnoff for Millennials and Gen Z alike. Before hopping on the emoji bandwagon, a brand must ensure they have the Editorial Authority to do so. Otherwise, prepare to receive a backlash of negativity from consumers. Editorial Authority is important because it can help your brand determine where you can add value and build a stronger content strategy.

How do you know if your brand has the Editorial Authority to use emojis? First, identify the core brand idea that guides your brand’s every action. At Barkley, we define the brand idea as the kernel of your brand’s operating system that must inspire all of your brand’s stakeholders. Next, uncover your customer’s unmet needs and the daily inefficiencies they need solved. Finally, determine the cultural relevancy of your brand and see if emojis fit within that realm.

Otherwise, your brand may find it has committed an emoji faux pas. One example of this is Hillary Clinton’s infamous campaign tweet, “How does your student loan debt make you feel? Tell us in 3 emojis or less.” The tweet became a laughing stock because, although emojis fit with the demographic the Clinton campaign was trying to attract, they did not align with the public perception of Clinton’s brand. As a result, the effort felt contrived. 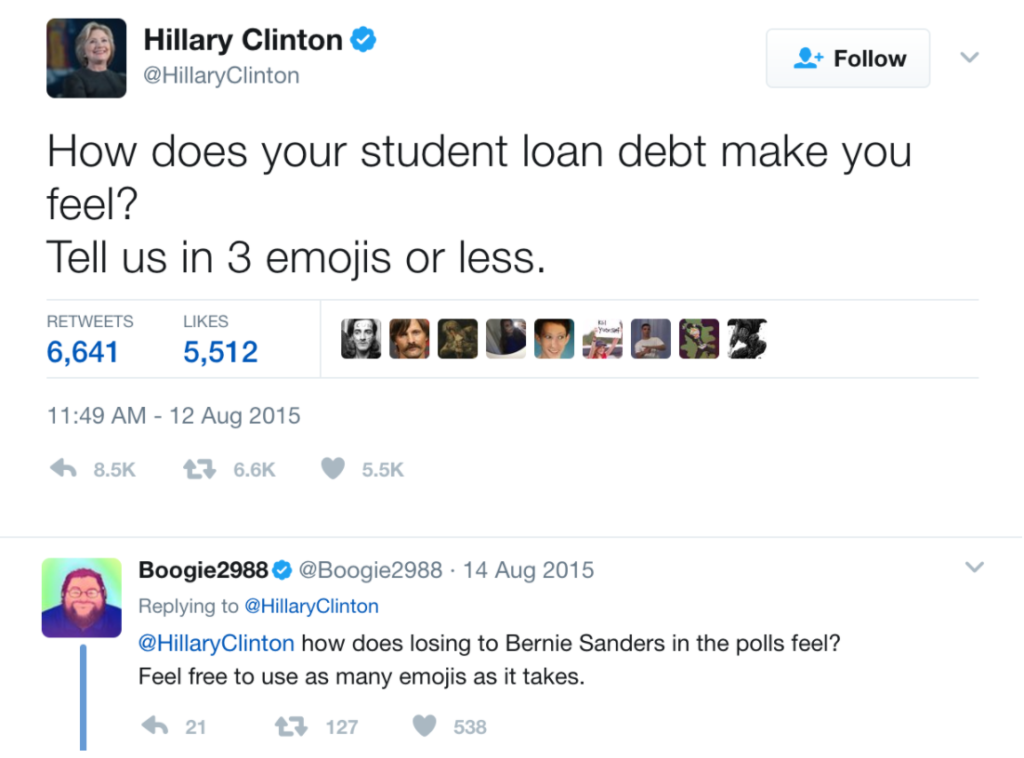 As it stands, politics and emojis do not mix well. In a 2014 report about Millennial healthcare, education and debt, the White House incorporated an abundance of emojis, which were later removed due to extensive criticism. “A millennial could find this tremendously infantilizing,” commented Natalia Mehlman-Petrzela, an assistant history professor at the New School University.

However, emoji marketing can be successful when a brand knows how to leverage it. In 2015, Domino’s launched their tweet-for-pizza feature, allowing customers to order a pizza by tweeting the pizza emoji 🍕 to Domino’s Twitter account. The customer still had to sync their Twitter handle with their Domino’s account and have a saved pizza order, but the innovative approach to convenience ordering was an instant hit. Domino’s wasn’t attempting to be “hip” — the emojis served a purpose that was useful, original, and authentic to the brand.

In summary, Editorial Authority is crucial for understanding and connecting with your brand’s consumers, regardless of the communication form in question. Whether it is with emojis or not, keep in mind that selling the ideas and beliefs behind the brand as opposed to just the product makes for a more humanized brand and, in turn, more loyal customers.