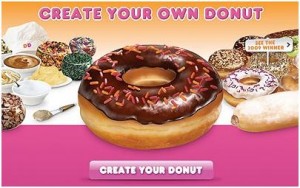 Many new marketing campaigns are harnessing the creative energies of young people. 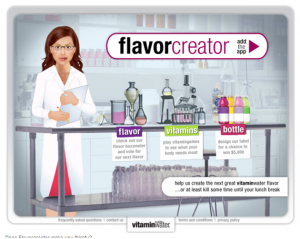 Vitamin Water is asking consumers to help them decide what the next flavor should be via a Facebook application called ‘Flavor Creator Lab’. Vitamin Water’s Facebook page grew by over 11% just in the past week. Since March, when the page launched, it has grown to more than 400,000 fans.

Mountain Dew just launched a new site called ‘DEWocracy’ inviting consumers to create the next flavor. As with Vitamin water there is also a Facebook app.

A  segmentation of people on the web based on involvement with social media put forward by Forrester (described on its blog, Groundswell.com) puts the group they call the ‘Creatives’ on the top rung.  Creatives are those who actively write blogs and web sites and upload audio and video files. The next rung down are the ‘Critics’, ‘Collectors’, ‘Joiners’, ‘Spectators’ and ‘Inactives’ who participate and comment but do not contribute original material.  According to a cool interactive profiling widget, 46% of 18-24 year olds in the U.S. are ‘Creative’ vs. 24% for the population as a whole.

All this leads me to suggest that Gen Y has been poorly named. They should be called ‘Gen C’ for ‘Creative’.

Young people dislike any kind of label and they especially dislike Gen Y.  Can you blame them for not wanting to be known as ‘the generation after Gen X’?  The attempt to rename them the Digital Generation or even Millennials fall short of being adequately descriptive, as they put the emphasis on the shapers of their generation rather than the result. In contrast Creative seems to suit them very well. Who wouldn’t want to be known as creative?   In ad agencies, the “Creatives” enjoy the most elite status for a reason.

There is evidence that creativity and self-expression are core Millennial values.

When we asked women in their twenties to select three values that best describe them from a list of twenty, “Creativity” is the value chosen most often by far, followed by ‘Adventurous’.

I have long maintained that the motivation behind Social Media is less about the need to be social than it is about self-expression (some  say narcissism, but I disagree). What is a Facebook page than an ad for oneself?  And what is MySpace about other than sharing one’s passions for music and all things artistic.  Little wonder FB users spend so many hours studying others’ pages and updating their own.

Millennials are famous for their visual sophistication and appreciation of good design. They choose products based on design as well as function (think MacBook). They are comfortable talking about ‘layouts’. I have accepted the fact that my student’s papers are always going to look more professional than my client reports.  You can always tell a Gen Y blog by its design. A favorite Gen Y art sharing site, Deviant Art, is the 67th most trafficked site on the web according to Alexa and skews heavily to 18-34 year olds.

Millennials’ are strongly interested in fashion, cooking and the arts.  Recently I wrote of the influence young fashion bloggers like Bryan Grey-Yambao (BryanBoy.com) and Tavi Gevinson (stylerookie.com)  are having on fashion. The popularity of the Food2 channel, farmers markets and cooking classes attests to their interest in cooking for reasons other than sustenance.  Six-five percent of 18-24 year olds say they consider cooking a ‘pleasurable hobby’.  The likely popularity of the ‘new’ movie, Fame, as well as TV shows featuring creative people and characters like Project Runway, Glee and American Idol all attest to their interest in fashion and the performing arts.

I don’t expect the name ‘Gen C’ to displace Millennial or Gen Y anytime soon, but as a descriptor useful to marketers, I think it offers great potential.