For Millennials, Is Google the New Home? 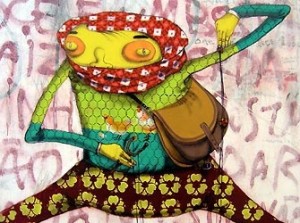 I’ve never been good at geography.  Perhaps because location, closeness, and distance, are all so subjective, sprouting from the roots we are given, and the lives we attempt to sketch out for ourselves. Often, I struggled with the idea of being from “everywhere” and “nowhere” at the same time, the absence and surplus of roots, the middleness floating within entirety, the paradoxes, and the bold question marks, popping up on the cinema screen of my mind, in extra-large font.

Growing up, I remember glorious summers, alternating between my Father’s native country of France, and my mother’s place of birth in Sao Paulo, Brazil.  As a family we traveled, savoring the beauty of French rigidity, while later dancing within the bright warm solace of loose Brazilian rhythms. Finding our own space in between the two paradoxical cultures that had birthed us.   Spending most of my childhood as a foreigner in Colorado, with summers “back home” in France and Brazil, I never considered Colorado to be my place.

In high school, my father decided he wanted us to truly live the “French experience,” so we packed up, and moved to Marseille for two years.    Upon our return to the United States, I entered college, traveling to the other side of the country, studying Economics, Sociology, and Theater, at Brandeis.  During most of my summers, I dabbled in Finance Internships in NYC, mostly to please my parents and grandparents.  Still, these summers near Wall Street ironically proved to be quite the experience in Sociological observation.  My experiences became topics for several papers as I returned to school.

Now after college, having moved to Brazil, I continue to live with a loose sense of geography, of  its possibility and its impossibility, of closeness, distance, and all the spaces in between. A flat map of the world.  The lack of borders, the fluidity of frontiers, the blurriness of culture and belonging, now transcends “home,” following me into the realm of work.

My first job out of college is probably most simply, but not completely defined, as a: writer/interviewer/journalist/blogger/researcher.  The relationship between my fields of study:  Sociology, Economics, and Theater, appears flagrantly obvious to me, and yet my choice often seems to evoke a look of intense puzzlement, even more so when I add, that music is my biggest passion, and that my dream is to make my living as a rock star.

Growing up to this musical mashup of French, Brazilian, and American lives may sound exotic and unique.  And yet, it’s not that different from the way most of my generation grew up.  Google is the new home.  It’s the constant base we touch upon.  We’re all a bit nomadic. Of course, most haven’t had the chance to physically travel as much, or actually bathe in the lost-in-translation state, as often as I did.  But the vast majority of my generation is well traveled, at least in the digital world.

Perhaps what most distinguishes my generation from past generations is our fluidity, the blunt imprint of a digital childhood and adolescence.  Technology has allowed us to build fluid identities, in which we constantly “edit” ourselves.

We are malleable Facebook profiles, google searches, and blog posts.  We are everywhere and nowhere at the same time.  Deleting, reconstructing and editing.  Copying and pasting the self.  And the editing never stops.  It’s one thing for Facebook, another for Twitter, one for Linked in, and yet another for the blog.  So we become fluid, adaptable, elastic beings.

Location and geography also become negligible and even subjective.  When one has the ability to “be” so many places at the same time, through e-mail, texts, facebook, Twitter, web cams, SKYPE, and cell phones, standing with your feet in Brazil, your head in India, and your heart in Antarctica, it’s hard to define exactly “where” you are. It’s no longer as simple and concrete as geography.

Often, we think of identity as being completely intertwined with the physicality of home. For instance, almost all the New Yorkers I’ve met take great pride in their home.  Their city becomes integral to their identity.   And yet I wonder, how the digital world will influence and shape people’s perceptions of nationality and cultural belonging?  When you can “be” on various continents simultaneously, where does that leave home?   Not to mention the fact that communities are no longer always physical, but increasingly virtual, thus making it harder to pinpoint the ideas of belonging, home, identity, and even nationality.

It seems the ingrained fluidity we’ve grown accustomed to, will influence the jobs we choose and the way we envision our careers.

For most, success is no longer a straight line to the top. Instead of boxing yourself in, and selling your soul to a corporation for life, there’s an undeniable trend towards freedom and flexibility, freelancing, and entrepreneurship, marking a desire for change and the constant reinvention of lives.

When I observe my friends, I notice there’s no in-between.  Either they are extremely traditional in the way they approach work, wanting to build a very traditional career which they envision spending at one particular institution, usually a prestigious bank or law firm; or they are, more like me, spread out all over the place, wanting to build something cohesive out of various, sometimes conflicting, passions.

What’s most interesting to me is that I’ve noticed that’s not just my generation who is re-examining and re-defining the notions of “careers” and “success.” Rather, it seems to be hitting older generations, just as it hits us.

It seems that our digital lives have really started overflowing into our real ones.  This clearly affects generation Y, but it also affects older generations, as they begin to redefine traditional notions of careers and success, in this increasingly fluid world.  The other night, I found myself speaking to a woman of 36, who has an undergraduate degree from Stanford, and an MBA from The Sloan School at MIT, and has now moved to Italy where she does freelance work in photography and explores and practices her passion for Astrology.  She’s also considering moving to Israel to work with a producer on her singing and songwriting.   At the same dinner, I also spoke to a man of around 45 who before obtaining his extremely high-profile job in Government was a flight attendant for many years.

In the semi-autobiographical novel, “The Buddha of Suburbia” by Hanif Kureishi, the narrator speaks of his mixed Pakistani and English heritage, by saying, “Perhaps it was the odd mixture of continents and blood, of here and there, of belonging and not, that makes me restless and easily bored.”

Ines Schinazi is a freelance writer for the blog, www.talkingaboutgenerations.com. She was born in Paris of French and Brazilian parents, and spent most of her childhood in Colorado. She recently graduated from Brandeis University in Boston, where she majored in Sociology and minored in Economics and Theatre arts. Ines currently lives in Sao Paolo, Brazil.