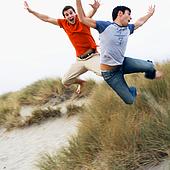 Millennials are different from other age groups and from other generations at the same age in three ways.

More at ease with digital and communications technology

The third difference, ‘optimism’, may be their most defining characteristic Why?  Bcause values ultimately guide and predict behavior.

Pre-recession, study after study in the U.S. and globally, reported that Millennials may be the most optimistic generation to date. And why not? Born into a period of unprecedented prosperity, into child-centric families who regarded children as minor royals, and into a period of exploding technology, Millennials are endowed with an unprecedented sense of empowerment. For these children of the new Millennium, anything is possible.

A fascinating book by Clotaire Rapaille, The Culture Code, describes the power of the American Dream this way: “We’ve built our [American] culture on dreamlike stories that, amazingly, are true.” It is this faith in the possibility of dreams that makes America so influential in the world. Who wouldn’t want to believe that anything is possible, that mistakes are simply ways we learn and precursors to eventual success?

For Millennials, the American Dream is very much alive, even in the midst of the Recession.

Pew Research has been tracking attitudes of Gen X’ers and Gen Y’ers for many years. They recently reported that “Today’s employed young people are actually somewhat more optimistic about their economic future than Gen Xers were when they were young.” (“Millennials Confident. Connected. Open to Change”) Even more startling, Pew found the overall level of optimism among Millennials about their personal economic future today is higher than it was in 2006!

“Even though the recession has been hard on young people, it has not dimmed their optimism. About two-thirds of Millennials (68%) say they are not earning enough money to live the kind of life they want. However, within that group the vast majority (88%) say they expect to earn enough in the future to live the good life. That is significantly higher than the percentage of Gen Xers (76%) or Baby Boomers (46%) who share this hopeful view.”

The same pattern holds for their optimism about the overall state of the nation. While their opinion has held steady, dissatisfaction among older consumers means the gap between generations is wider than it’s been in 20 years due, at least in part, to widespread dissatisfaction among those 65 and older.

What does the American dream mean to a Millennial?

This question was asked last week in a fascinating Twitter Chat hosted by a member of our Gen Y Marketers “Super Community”, Chanelle Schneider (aka @writerchanelle and  @genYchat) and co-hosted by J. Maureen Henderson (aka @generationmeh). The discussion evoked 436 tweets from 45 contributors. The responses suggests the concept of ‘dream’ is one that Millennials strongly relate to.

@GenYChat: What ideas or associations does the term “American Dream” conjure up for you?

@tylerdurbin The American Dream is having the freedom to explore any and all opportunities we desire. ‘Nuff said. Chat over.

@josippetrusa: Gen-Y is reinventing it. Gen Y is a generation based on dreams.

@nahumg: GenY wants to live dream lifestyle now rather workin a lifetime to get it

@tylerdurbin: If we work now can we not have things we want?

@daniellewriter: American dream is meritocracy-if you work hard enough, you cam have it all

@kelly_ashworth: I think we have to fight harder and have more of a plan… opportunity is not there waiting & won’t just fall into place

@GenerationMeh: But what constitutes a “dream lifestyle”?

@josippetrusa: Depends, but gen-y would like a managerial job, a bmw and all the gimmicks of success.

@josippetrusa: The american dream has been changed to exemplify quick success that some have achieved from advances in technology. We are limitless.

@GenerationMeh: Idea of opp, potential & self-sufficiency as the ingredients for success is ingrained in American identity. Source of pride.

Tomorrow: How Gen Y is redefining the meaning of success.