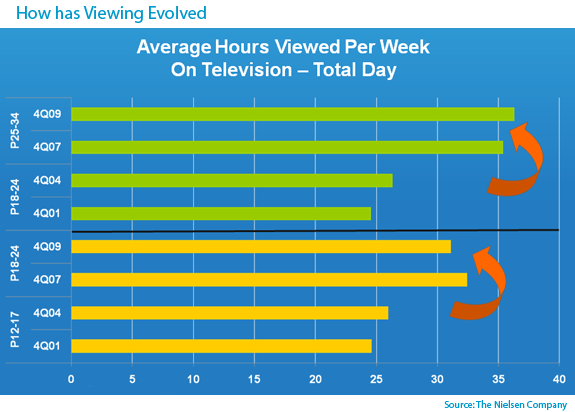 Study after study has shown a dramatic shift, not in hours spent watching video, but where it is watched.

“Generation M2: Media in the Lives of 8-18 year old s” Kaiser Family Foundation Longitudinal research tracked changes in media use 1999-2009 via diary.  Loaded with great charts on total media usage and how it breaks out by medium over time. Total hours spent with media has increased by over 2 hours due to multitasking. TV accounts for 4 hours 29 minutes a day, but only 59% (2 hours 39 minutes) is watched live.

“How Teens Watch: The Future of Media is in Their Hands: Nielsen “12-24 year olds are more connected, more tech savvy, and more likely to use personal devices such as smartphones, laptops and other gadgets for video viewing. They are also less likely to watch traditional television. Teens living at home tend to watch more TV overall than 18-24 year olds busy with college or their first jobs. But the “first screen,” TV, is less central to both.”

But will this behavior shift persist as Gen Y ages?

The Nielsen research raises some interesting questions regarding whether this pattern away from traditional TV and toward time shifted TV or third screen is age and lifestyle related or generational. This may seem like hairsplitting, but actually is important. If the behavior is age and lifestyle related, they may revert back to traditional viewing with age. If it’s generational, however, we’re seeing something more fundamental.

Nielsen suggests the changes may, in fact, be more due to age. But I think it’s generational.

Let’s look closer at the Nielsen analysis. This gets a little convoluted, but bear with me (it helps to look at the chart above as well).  According to Nielsen:

Even more dramatically, the young adults of 2001 watched less than 25 hours of television but watched more than 36 hours a week of television as they aged into the 25-35 cohort.”

Second, the Nielsen analysis doesn’t account for the fact that the media environment is exploding with options, making it difficult to predict how today’s 18-24’s will behave ten years from now.  If the pattern of increased television holds, they will watch more, but that does not necessarily mean it will be on traditional television.  “Convergence” is something that has been predicted for a long time.  Given the dramatic changes in time shifted and third screen viewing by Gen Y, it may actually come true sooner than we think. In my opinion, the changes indicate a generational shift. Those in traditional television should take little comfort in the Nielsen analysis.