Reflections on a Season of Marketing Conferences 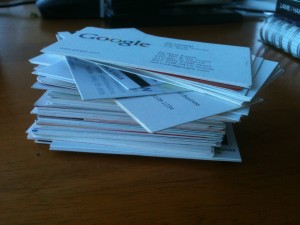 “Souvenirs” of the Season

Since April, I’ve attended and/or been a presenter at ten marketing conferences in eight different  cities:

It’s been both fun and exhausting. At this point, I feel as if I’ve heard or said just about all there is to hear or say on the topics of Millennials, social media and digital marketing.  I’ve heard some amazing presentations and some, well,  not so amazing ones.  I’ve had a chance to meet many people with similar interests. I’ve had a chance to hear people I have admired from their blog, book, tweets or reputation — like SidneyEve Matrix, Brian Solis, Jackie Huba, Arianna Huffington, Jeffrey Hayzlett, Kit Yarrow, Steve Rubel, Richard Edelman and more…

Here are some of my observations about the state of marketing conferences as viewed from a conference chair or podium, in no particular order:

1. FourSquare is not being embraced by marketers. I was shocked to see how few people checked in. Even as Evan Cohen, General Manager of Foursquare was presenting at Pivot, there were only a handful in the audience who had checked in.  It’s fairly easy to become a ‘mayor’ at these events due to the low participation.

2. Twitter has changed the conference experience: For better or worse, there is a back wire conversation among people inside and outside the conference session. Nearly everyone in an audience these days has their eyes on a computer, smart phone or iPad through much of the presentation. Sometimes subversive (“May I please have my last 15 minutes back?”), sometimes complimentary (“So and so is rockin’ it!”), Twitter comments provide better, more real-time feedback than feedback forms. It also confirms for me that I do not want my students tweeting in class.   The highest Twitter use? Academics at the Edelman Summit. The lowest? The CMO Summit. I’ll leave you to draw your own conclusions.

3. Don’t go to conferences to hear cutting edge social media cases. There are very few case histories other than those presented by ‘vendors’ and these tend to be less insightful than you’d hope. Even agencies are not talking. At Pivot, there was a revealing moment when a distinguished panel of speakers who had each just spoken on social media strategy was asked if they could describe an case histories.  Each one declined citing confidentiality. It was an awkward moment.  There were some great cases, like Bedsider.com (Pivot) and University of Phoenix (iMedia), and Houlihans (Ad:Tech). However, the only major cases have already been written about extensively elsewhere.  Companies like Unilever and P&G have little to gain by sharing, so they aren’t.

4. If you’ve read the book, you don’t need to hear the speech. Authors are often featured speakers but I found, with very few exceptions (Kit Yarrow and Arianna Huffington you rock), that the most famous speakers bring their stump speech. I understand this; preparing a new presentation is a lot of work. Nevertheless, it would be nice if they would speak to the topic. (FYI, I modified my presentation quite a bit for each audience.)

5. The best sessions leave time for questions and audience participation. Interestingly, my favorite experience was in Kalamazoo (Michigan Museum Association) where we had plenty of time to talk as a group following my presentation. The feedback focused on how helpful this was: “Great discussion among the audience.” While that was a smaller group of about 25, an interactive session in San Diego by Jeff Rosenblum of Questus proved it can also be done with a larger audience.  Each table was required to interact around a series of questions stimulated by some provocative videos of social media thought leaders. A+++

6. Panel discussions can work if they are well-moderated. I know there is a general aversion to panel discussions as they can meander, but my experience with well-moderated panels at CIMA, Edelman Academic Summit and Pivot suggest it can be done. At CIMA, where I was a panelist, there was extensive preparation via phone calls that shared the questions to be asked and a panelist-only dinner right before the event. At Pivot, each panelist first gave a 10-15 minute prepared presentation prior to the panel and the moderators were very well-prepared.

7. All roads lead to social media. Whether the topic was Millennials, branding, or digital marketing social media was the underlying theme. The wisdom on this subject became rather repetitive – media habits are becoming more social, consumers expect to interact with brands, social media is a tactic not a strategy, experimentation is key, content is king and it’s transformative potential extends beyond marketing.  Everyone from professors to marketers seem to be scrambling to keep up with this fast moving train. It’s going to be a year or two before we get beyond the hype to best practices.

8. Social media is from Venus, digital marketing is from Mars, mobile is from Pluto. The money is in digital marketing, but everyone seems to know that the real power is in social.  The sophistication of digital marketers is astonishing when it comes to getting a message in front of the right person at the right time. Everyone knows money needs to shift to where consumers are spending their time – social and especially mobile. But these are early days for both. Tune in a year from now and the story may be different.

9. Agency presenters have the best slides.  They also seem to be the only ones that know how to seamlessly integrate video.  Brian Fetherstonaugh, CEO of Ogilvie One, made a presentation “The Digital Future: Highway to Hell or Stairway to Heaven?” at iMedia Brand Summit in San Diego that was among the best for sheer entertainment value.

10. The best presenters use no slides at all.  Arianna Huffington of the Huffington Post and Jeffrey Cole of USC’s Center for the Digital Future both held my attention completely for an hour with plenty of statistics and quotes, but without the use of Powerpoint or notes. True they had each given these presentations before, but it felt like I was the first one to hear it.

After all the preparation, travel, presenting, and meet-greet time, I have to ask myself whether it was all worth it?

On a personal level, the answer is ‘absolutely’. I feel more informed and  ‘in the loop’. I am better prepared to teach my MBA class in Brand Strategy beginning in January. I’ve had a (mostly) expenses paid front row seat to view the state of marketing circa 2010, an honor and experience I could never have afforded otherwise.

However, from a business development standpoint, the answer is ‘no’ — or perhaps, more hopefully, ‘not yet’. I have accumulated a bewildering stack of business card ‘souvenirs’, but while I enjoy networking at events, I am not very good at following up. (My apologies if you are among the stack.)

Another possible reason for the lack of business productivity for us at conferences is that (surprisingly to me) there is still some resistance to the idea that Millennials really are that different, even among Millennials. Many resent being thought of as a different ‘species’ of marketing target and point out the many ways that they are similar to other generations.

Perhaps the main reason I don’t find conferences an effective business development strategy is that I and many other speakers give a lot of my information away for ‘free, mitigating the need for proprietary research?  But why stop now?

Now to tackle those business cards….