Millennials are a generation that is completely redefining what adventure means and are looking at the world through a more global perspective. For millennials, traveling isn’t a luxury; it’s an intricate part of their lives with 78 percent of them choosing to splurge on experiences over “things.” They are also 23 percent more interested in going abroad than older generations and make up 20 percent of all international tourists. According to the United Nations, those 200,000 million millennial tourists generate more than $180 billion in annual tourism revenue, an increase of nearly 30 percent since 2007.

That being said, millennials are savvy travelers, often staying in hostiles or choosing AirBnb over expensive hotels. After all, they won’t spend big bucks on a room they’ll barely use. Most will drop their bags and leave their rooms in search of the next unique experience they can share on Instagram and Twitter.

Getting millennials to opt in 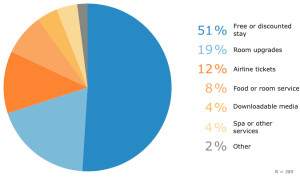 Because millennials are coupon oriented, they are often willing to trade their personal info for good deals and incentives. Half of the millennials that participated in the Software Advice survey said they would join a hotel loyalty program if given discounts on rooms, while 19 percent said they’d join for room upgrades, and 12 percent said discounts on airline tickets would entice them.

Millennials are split, however, when it comes to using their social media sites in exchange for points. About 27 percent said they’d post about their hotel experiences for extra points, while another 27 percent said it was unlikely.

Components of a successful loyalty program
In any industry, brands that are transparent and offer unique, useful and meaningful experiences will win with millennials, which means hotel marketers should do the same when pushing their loyalty programs.

For example, 41 percent of those surveyed said they joined a loyalty program because the program was easy to use. Since millennials are more technologically inclined and connected to the Internet, one way for hotel loyalty programs to receive millennial buy-in is to make them available on smartphones. More than half said they’d find an app moderately or very valuable.

Two other components of successful rewards programs are: “frequency of rewards” and “surprise and delight.” For example, the program should offer rewards early and often but also occasionally sprinkle in freebies that are beyond what customers expect in order to “surprise and delight” them. The Hilton, for example, is currently offering double hotel or airline points to loyalty members who book a room over the next few months.

Millennials will appreciate the smallest perks, even if it’s a free glass of wine or a personal training session in the hotel gym. When it comes to millennials, it’s the small gestures that count in a big way. They want to be part of your exclusive club but they also want to feel personally invited and included.